The Tesla valve is a passive “check” valve with a fixed geometry, which means that the valve contains no moving parts, and therefore the valve’s operation is determined only by its geometry.

Nikola Tesla, the inventor of the valve, presented the geometry of the valve he created in his original publication, which is shown in the figure below.

In the forward flow (5), the flow of the medium in the main branch of the valve is not interrupted by the flow in the side branches, the generated pressure drop is caused only by the internal friction of the medium. On the other hand, in the case of reverse flow (4), the flow in the main branch is hindered by the medium flowing back from the side branches, which creates an additional pressure drop between the pressure measured at the inlet and outlet cross-sections

To examine the diodicity characteristic of the Tesla valve, the value of the velocity component normal to the inflow cross-section was assumed to be constant, and the inflow velocity was determined by the Reynolds number of the flow to observe the laminar or turbulent behaviour of the flow.

The animation below shows the forward and reverse flow, and the change in the relative pressure value produced compared to atmospheric pressure along the length of the valve. In the animation, the velocity of the incoming medium is the value corresponding to Re 2000.

It can be observed that in the case of reverse flow, the flowing medium initially exhibits laminar behaviour until the medium flowing in the main branch meets the medium flowing out of the side branch, which results turbulent flow. In contrast, in the case of forward flow, the flow in the side branch does not affect the flow in the main branch, the relative pressure value generated being due only to the internal friction of the medium. 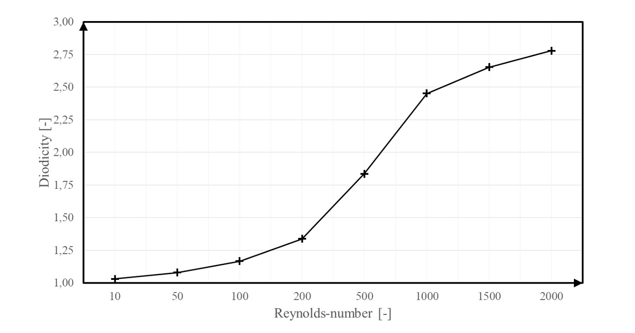 From the results obtained, it can be seen that the Tesla valve can be used as a check valve and is most effective for flows with a high Reynolds number.